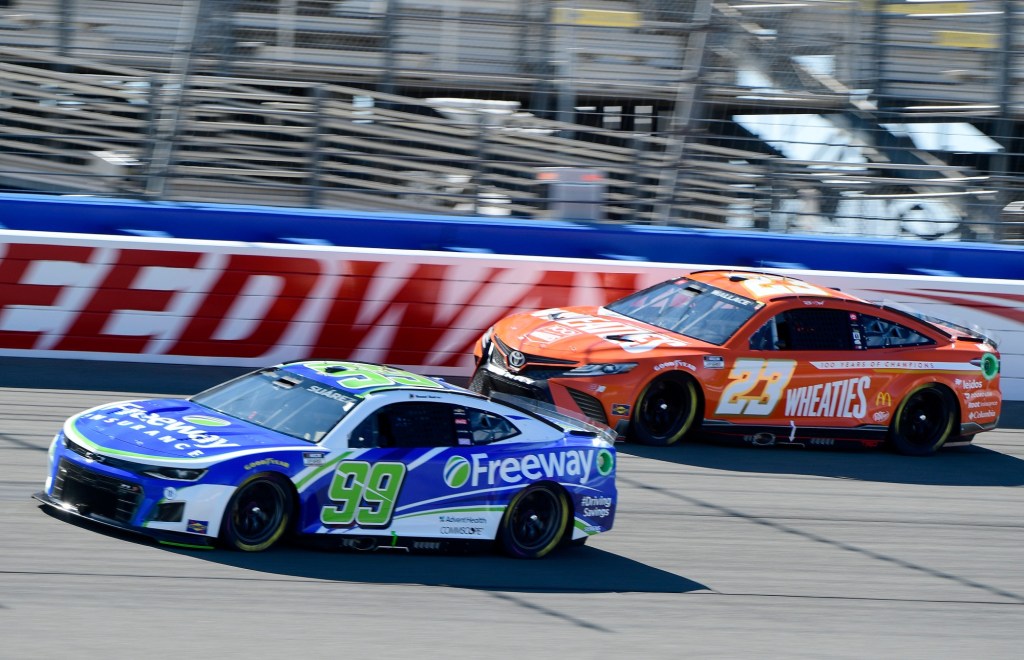 FONTANA – A freeway sign on Highway 210 just west of Highway 15 read, “Gusty winds ahead.” It was a warning to passenger car drivers, but it could also have served as a warning to NASCAR drivers and their crews competing nearby.

Morning winds of 30 to 40 mph, combined with the apparent difficulties of getting used to NASCAR’s newly designed Next Gen cars, turned Auto Club Speedway into a rough town on Saturday.

Another reason for the abundance of crashes and spinouts on a clear, cool day may have been the fact that this venue hadn’t hosted a NASCAR race in two years, due to last year’s cancellation. caused by the pandemic.

The misadventures began with the Cup Series morning practice sessions and continued throughout midday qualifying.

Austin Cindric, the surprise winner of last weekend’s Daytona 500, survived it all to take pole in Sunday’s WISE Power 400. He claimed first place in qualifying on Saturday by covering the two-mile course in 41.266 seconds with an average speed of 174.647 mph.

Sunday’s race, scheduled for 12:30 p.m., is only the 10th Cup Series race for the 23-year-old from Mooresville, North Carolina, so he is considered a rookie. A win at Fontana would go a long way to show that he is more than a one-race wonder.

It’s been quite a hectic week for Cindric. The highlight was receiving a congratulatory post-Daytona voicemail from the legendary AJ Foyt. Fifty years ago, Foyt, who raced on multiple tracks, won the NASCAR Winston Cup Miller High Life 500 at nearby Ontario Motor Speedway.

“I’m going to put this message on a hard drive and save it,” Cindric said.

Cindric was brought back Monday morning when he checked his mail and found a jury summons.

“I’ll try to get out of this,” he laughed. “I hope being a NASCAR driver works.”

For NASCAR diehards who love statistics, Cindric is only the third driver to win the season-opening Daytona 500 and pole for the race the following weekend. The others are Logano (2015, Atlanta) and Jamie McMurray (2010, Auto Club). And Cindric is just a rookie.

Asked what it’s like to be called Daytona 500 champion, Cindric replied, “I smile every time someone says that.”

The topic of the day, however, was Next Gen cars and all the mishaps.

“I’ve never talked to myself so much before doing a qualifying lap,” said Cindric. “After seeing all the problems, all the mistakes, you have to go through everything in your mind.

“I had two good runs (around the track) so I was pretty careful with my third run.”

Eric Jones, the No. 2 qualifier, said: “I was nervous even before I went out for practice, just seeing the guys make mistakes.”

Of the new cars, Jones, 25, of Byron, Michigan, said: “They are so tough. It really is an unknown. The driving style is 100% different.

Subsequent spinouts, including one by Daytona 500 runner-up Bubba Wallace, delayed qualifying by half an hour.

Brad Keselowski spun into Turn 2 in the second qualifying session, then adamantly refused to have his car towed. He wanted it to be transported on a rollback truck. Keselowski, also a team owner, sought to avoid further damage to his car due to a lack of parts inventory.

Daniel Hemric hit the wall and William Byron Jr. and Joey Logano were among the victims of the spin-out.

Kyle Busch, among the pre-race favorites, will start 36th and last Sunday because his car failed a pre-qualifying inspection. The cars driven by Justin Haley, Chastain and Wallace could not be repaired in time to earn a qualifying grade, but all will be on the field.