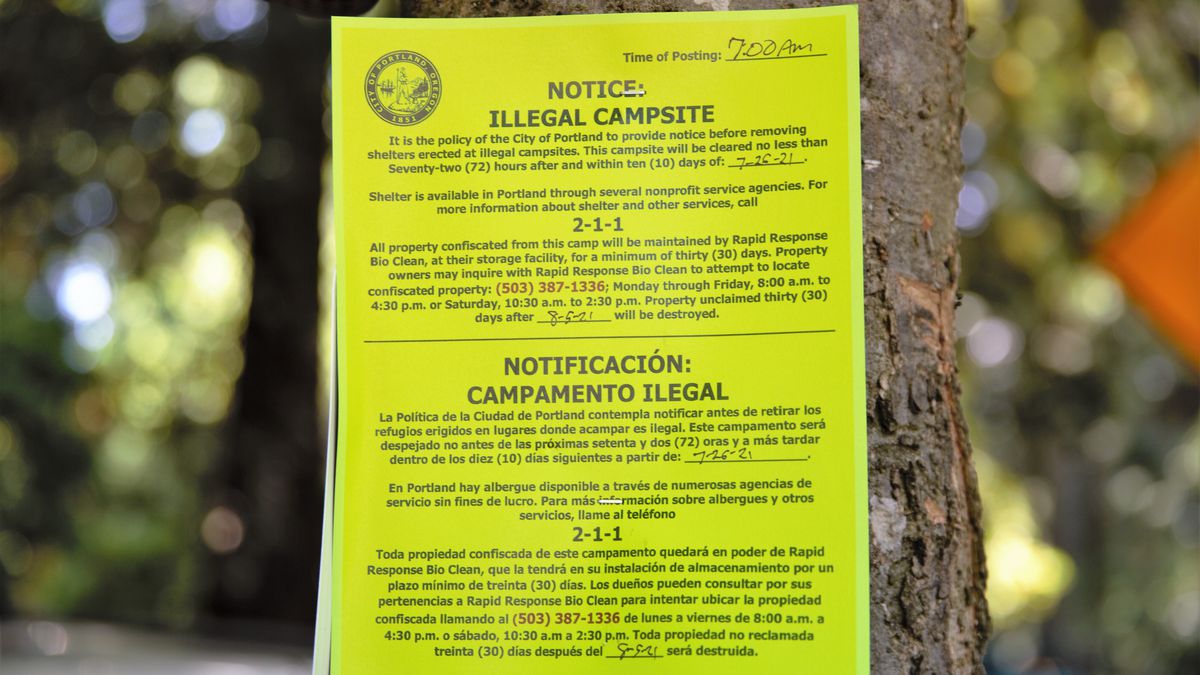 Every few weeks, a familiar pattern unfolds among the homeless camps that line Portland’s Laurelhurst Park.

The city is sweeping. The campers are moving.

In a few days, they come back. The city is sweeping again.

For more than a year, tents, cars and shopping carts overflowing with trash have lined the streets next to one of the city’s most popular parks. The camp, which stretches from Southeast Oak Street to nearby 37th Avenue, has made headlines with housed residents decrying it as a public health nightmare and homeless campers saying there is no anywhere else to live.

After more than a year of swipes and comebacks, weary Laurelhurst residents are now trying to take matters into their own hands. An unidentified group of neighborhood residents have hired one of the most powerful lawyers in town to push the town with an unexpected legal argument: do it for the trees.

On August 22, Davis Wright Tremaine attorney John DiLorenzo, who filed a class action lawsuit earlier this month to get Portland officials to clear the city’s sidewalks of homeless camps, wrote to city ​​leaders on behalf of “concerned neighbors of Laurelhurst Park and Laurelhurst Park Annex” hinting at possible future litigation.

In the letter, which OPB obtained via public records request, DiLorenzo argued that Laurelhurst campers needed to be moved because the status quo was too dangerous. Campers, he argues, damage trees along the outer edge of the park and those trees could injure campers.

“Branches and limbs from trees are at risk of falling and pose a significant threat of serious bodily harm or death to anyone in their target area,” DiLorenzo wrote to City Attorney Robert Taylor and City Forestry Officer Jenn Cairo. “Anyone living or sleeping in the tent camps is at high risk of death or injury far greater than that of an ordinary pedestrian.

“My clients urge you to permanently clean up the tent camps that line SE Oak Street and send in licensed arborists to tend and repair city-owned trees,” DiLorenzo continued. “My clients do not want to see a senseless and tragic death or injury caused by the City’s inaction.”

Who exactly DiLorenzo’s affected customers are remains a mystery. DiLorenzo declined to identify them, noting that they had not given him permission to do so. A member of the Laurelhurst Neighborhood Association, which is increasingly aggrieved by the camps, said the group knew nothing about the letter.

DiLorenzo said his client’s goal, whoever he is, is to alert city leaders that they’re “biting on a lot of responsibility” by continuing to license the Laurelhurst camp. A future attorney, he said, could refer to that warning if a branch actually hurt one of the campers.

“If it falls, it’s disastrous,” he said of the trees. “And I wouldn’t blame the families of the people who were killed for suing the city for negligence.”

Strengthening the argument was a 19-page report that Davis Wright Tremaine commissioned from Pacific Consulting Arborists to examine the impact homeless camps were having on park trees. The report, which analyzed the health of 12 elm trees and two hackberry trees on Southeast Oak Street, said the trees were in poor condition and getting worse.

“These trees are tall, old, have flaws that have not been mitigated, and are not regularly maintained, increasing the likelihood of tree parts breaking down and hitting a person,” the arborist wrote. hired Kyle Offerdahl in the report, which includes several photos of allegedly dead or broken tree branches hanging over the encampments. “As these trees age, experience extreme weather conditions and become more prone to diseases such as Dutch elm disease, the likelihood of part of the tree failing increases. .”

The safest course, the private arborist explained, is for campers to leave.

People living on the tree-lined stretch of Southeast Oak Street said Monday they have no plans to move permanently.

Buster Sims, who said he had been living at the site from his car for just over a month, noted that he felt safer close to nature and away from people’s doorways. Moreover, there was security in numbers. When the town crews swept the camp, he said, he and some of the other campers usually hung around a few blocks until the effort was over and then returned.

The same day DiLorenzo sent the letter and report to the city, the Portland Parks Bureau dispatched one of its own arborists to Laurelhurst. The arborist “inspected the area visually, from a distance” and found a tree that is expected to be removed soon, according to a written statement from office spokesman Mark Ross.

“[The city arborist report] did not identify tree emergencies on the SE Oak Street side where people live outdoors,” Ross wrote. “City arborists want to do a more thorough inspection of these trees and have scheduled one pending the absence of people living below them. Portland Parks & Recreation staff are ready to inspect trees when the area is safe for this job.

Ross also noted that the city will notify campers next week that they are about to be evicted again.

While many Portlanders lament that their complaints to City Hall are being ignored, DiLorenzo has proven particularly good at catching the ear of Portland’s leaders. He walked away with a $10 million settlement from the city in 2017 for alleged improper spending by the city’s utility offices.

The OPB reported last December that DiLorenzo had hired a private security firm to investigate a homeless camp near a building he owned downtown. The private security company then presented the resulting report, which detailed suspicions of drug trafficking and street corner prostitution, to the city’s police chief, deputy chief, mayor’s chief of staff. and the city attorney, among others. Within a week, the camp was swept away.

And two weeks ago, DiLorenzo filed a class action lawsuit on behalf of Portlanders with disabilities to get the city to scrap all homeless camps in Portland and move people to shelters. The lawsuit alleges the city violates the Americans with Disability Act by failing to take down tents that block sidewalks.

DiLorenzo said the ADA lawsuit and Laurelhurst’s letter are two parts of the same effort: He’s trying to convince city leaders to remove homeless camps across the city and build new shelters. urgency to move people there.

“Listen, please don’t think all I want to do is sweep the camps to make the town look good.” That’s not my goal,” he said. “The adversaries are not the homeless. It was the politicians who brought us here… and now they don’t seem to have the will to do much about it. So I try to bring them forward. »