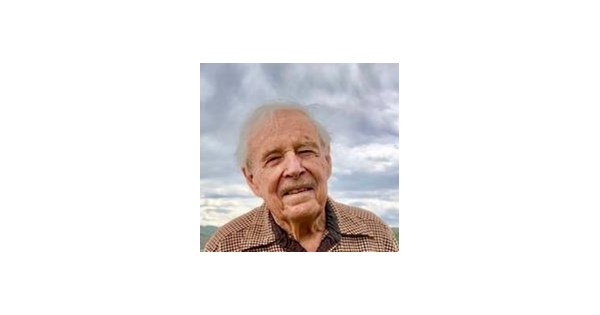 Salt Lake City, Utah â€” John died on August 25, 2021 in Salt Lake City, Utah from complications from COVID-19. Even though he was vaccinated, the combination of underlying aspiration pneumonia and waiting too long to seek treatment proved too difficult for his body to recover. John was born to Leona and Sam Barnes in Jackson, Missouri. When he was about five years old, his parents moved him with his younger brother, Sam Jr. to Cheyenne, Wyoming. The boys grew up in Cheyenne, engaging in fraternal mischief involving nighttime escapades, firecrackers, and a general heckling worthy of two best friends, born exactly five years apart. John met the love of his life, Joyce Colburn in the late 1940s while they were both in college. After getting married, they moved to Portales, New Mexico, where John served as a mechanic in the Air National Guard, repairing planes used during the Korean War. Note: he rigged his age to join the Guard! In Portales, their first daughter, Ariel, was born in 1952. After returning to Laramie to complete his education, John and his family moved to Littleton, Colorado, where he worked for Thiokol. In 1958, during a terrible blizzard, her second daughter Barb was born. Barb had a birth defect and needed to be rushed to a Denver hospital, but all ambulances were out in the storm. So John transported her newborn baby, her incubator and everything, and the pediatrician to the hospital in her car for emergency surgery. In 1961, John and his family moved to Salt Lake City, Utah after a work transfer to Hercules. He and Joyce began to put down deep roots in Holladay, a suburb of Salt Lake. John had a long career as a systems analyst at Hercules. He was heavily involved in Toastmasters, was an avid skier, and participated in handball until his late 70s. John also became an accomplished private pilot and used his time at the Skypark in Bountiful, Utah, and his family’s plane to visit relatives in Wyoming and Michigan. He also helped Ariel get her student pilot license before she could legally drive a car on her own. He also taught the two girls how to drive a manual gear shift on the floor or column, as well as how to change tires, oil, and spark plugs. John and Joyce were dedicated patrons of the Salt Lake performing arts, supporting Ballet West, JazzSLC (GAM), Pioneer Theater and the SL Acting Company. They were founding members of the Shakespeare Festival in Cedar City, only missing when illness prevented them from attending. In addition, John was a member of the Humanist Society and the Unitarian Church. John also had a strong artistic streak, including painting, photography, carpentry, carpentry, and stained glass. A dedicated reader of all things history and politics, John has remained informed and able to converse on everything from European issues and local history, national events and politics. (Thanks Frost’s Books and Wellers). Following a horribly botched hip replacement surgery that resulted in the loss of the use of his right foot and ankle, John had to abandon his home and his connection to his wonderful neighbors. The silver lining was to be able to move into Parklane independent living apartments where he made many friends and enjoyed all aspects of the community. Much to the dismay of many, he continued to drive, with his left leg and foot, but he did so without ever having a serious accident! (Don’t try this at home) As he walked through the “old quarter” almost every day, he also found new ways to socialize, including stopping by his local mechanic almost every day (thanks Slaugh’s Car Care) and being the liquor store runner for friends in Parklane. Before John in the Greater Realms of Love, there was his wife Joyce, his parents, his brother Sam, and his granddaughter Renee. He is survived by his daughters Ariel Owen, retired educator (Walnut Creek, CA), Barb Barnes, conflict resolution facilitator (Helena, MT), his granddaughter Autumn Barnes, podcast producer (Missoula, MT) , his sister-in-law Anita Barnes, his nephew John. Barnes (Glore), brother-in-law / sister Frank and Charlotte Colburn, nephew Mark Colburn (Brenda), nieces Cate Colburn-Smith (Chris) and Anne Colburn-Ehrhart (Tim) and de facto cousin Malin Foster (Cody, WY). The family would like to express their deep gratitude to: The wonderful people who live and work in the Parklane community, Wendy Flath PT extraordinary, Amanda Lambert now a family friend and our â€œboots on the groundâ€ at SLC, Envision Home Health, Fred Gotleib MD a practical and wise physician, the amazing ICU doctors and nurses at the Salt Lake Regional Medical Center who made this terrible time a time of healing, compassion and beyond care, especially Dr. Sara Scott, Dr Justine Ly, Nurses Chad, Nick, Cheyenne, Jamie and Emily. We are also incredibly grateful to all of her friends including Sue and David, Margo and Bob, Chad and Mu, Cosette and Barb, Janet, Jud and Adele, Brad and Ryan, Scott and their wonderful neighborhood family in Holladay. In his final days, John was full of gratitude and the grace of the final farewells. Truly, one can say that her tender heart has been fully restored because her last words were “Thank you, thank you, thank you”. Be sure to tell a silly joke in his honor and consider donating to: The Junior League of SLC: 526 East 300 South SLC, UT 84102.

Modern Mobility: Beg Buttons – It’s Not About Pushing The Button