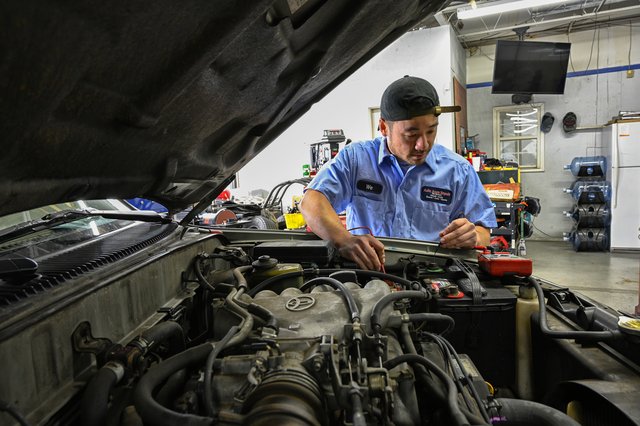 This caused dealers to seek used cars more widely, which saw huge price increases over the last year and more. JT Hartman, sales manager at Jacky Jones Lincoln, said he sold some used vehicles for thousands of dollars more today than they were worth four years ago.

“I have to go to southwest Florida to sell goods to COVID victims and buy (vehicles) from them,” he said. “I drove down the road and saw a car sitting on the side of the road, and I inquired about that and bought some that way too.”

The car shortage means many people are trying to hold on to their vehicle for longer until the market stabilizes. Some mechanics in the area say they have been busier during this time and parts are hard to come by with long wait times.

“People are definitely taking better care of their current vehicles,” said Mark Knapp, manager of a Meineke Car Care location in Gainesville. “While they could probably sell their car very well, the fact is there isn’t much else to replace it.”

Evario Sanchez of Sanchez Auto Repair in Gainesville said the past few months have been the toughest time to get parts in his 20 years working on the cars. Chevrolet and Ford parts are especially hard to find, Sanchez said. Sometimes customers had to wait two or three weeks before he could get them into the store.

Wee Tran, co-owner of Asia Auto Repair and Sales in Gainesville, said he hasn’t had as much trouble getting parts as others. “We can still get parts with no problem,” Tran said.

But customers have told him recently that they’re trying to take better care of their vehicles, so they don’t have to buy in today’s market.

Less popular vehicles and large trucks can be the most troublesome.

“Heavy duty trucks, these poor guys haven’t been able to get a brake job in six months,” Knapp said. “It seems that because sellers know they’re limited on how many deliveries they can get, they’re cutting back…just ordering their most popular sizes.”

Many parts can take 8-9 weeks to arrive, he said. “Everything is a little slower, a lot more expensive,” Knapp said.

Car dealerships do not expect the problem to resolve itself very quickly.

“People have been saying it’s been starting to stabilize for over a year,” Passmore said. “We’d like to see it before we believe it.”

Autonation says half of cars arriving at dealerships are already sold