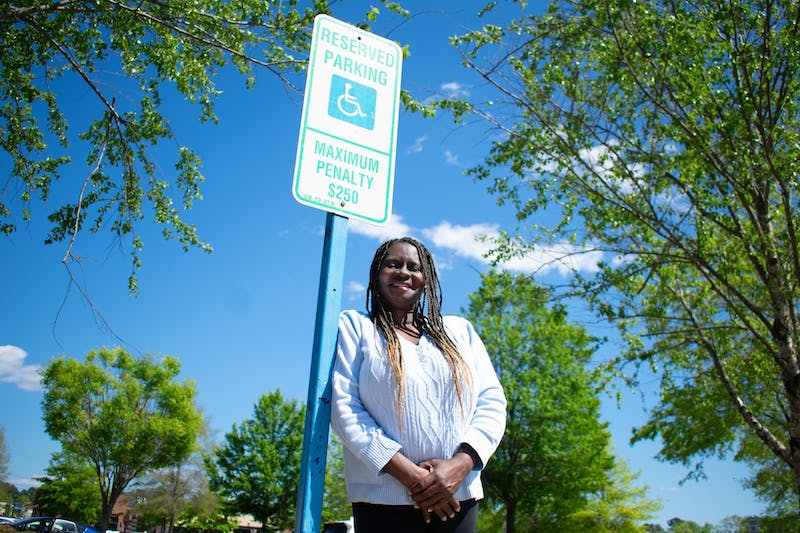 For disabled veteran Darice Johnson, finding parking in downtown Chapel Hill can often be a challenge due to congestion on the side streets.

“It’s very stressful trying to drive and park in these areas – all that 10-block radius,” Johnson said.

And while Chapel Hill residents know the difficulty of finding downtown parking, the problem is even greater for those who are limited by disability or cost.

Timothy Miles, executive director of the Triangle Disability Awareness Council, said parking in downtown Chapel Hill is limited and often does not allow easy access to surrounding buildings. The influx of construction in the area has also exacerbated the problem.

“It makes getting in and out very difficult because it’s confusing – discouraged is a better word,” he said.

Even with the influx of new parking spaces built on Franklin Street, Johnson said she hasn’t seen many new spaces built for people with disabilities. As a result, those using equipment may have to park in a less accessible area when attempting to reach businesses and facilities, such as the post office.

She said the car parks around Chapel Hill aren’t as user-friendly as they could be. The long distances between bridge entrances and exits often make access to facilities more difficult for people who need equipment.

“If there are more disabled parking spaces on the sides of these buildings, it makes them more accessible to people with disabilities – without having to go that far to try to park,” Johnson said.

ADA standards also required accessible spaces to create the shortest possible path to the accessible entrance of the facility to which they are connected.

Dwight Bassett, director of economic development and parking services for the City of Chapel Hill, said the city is currently in compliance with all state laws regarding ADA requirements.

“We are currently undergoing an audit to ensure that we are currently up to all that we do for ADA,” he said. “Generally, these requirements are fairly fair and reasonable from an accessibility standpoint.”

Sarah Poulton, downtown special projects manager for the city of Chapel Hill, said the audit is part of the city’s ADA transition plan. The plan aims to identify factors that limit accessibility to Chapel Hill and to make improvements in identified areas.

Poulton said while the transition plan includes looking at parking issues, there are also a number of other factors to consider, including facilities, sidewalks, crosswalks, programs and Services.

“I really think we have the best team in the private sector helping us,” she said. “To do things right, it just takes time. That’s what we learn every day about it.

Miles said he thinks it’s important to communicate with the disability community when there are plans to redo or rebuild a parking lot. He added that he doesn’t think there has been enough action from the Chapel Hill government on accessible parking.

“They should always research organizations such as (the Triangle Disability Awareness Council) and anyone who will use the area to see where spaces have been an issue to park for people with disabilities,” he said.

Parking accessibility is also an issue for Chapel Hill residents and UNC students who must contend with the cost of parking in the area.

“The city’s supply and construction of parking lots is something that has to compete with other priorities,” said Josh Mayo, transportation planner for the city of Chapel Hill. “As such, it is important to maintain a competitive parking program that can pay for itself.

Bassett said parking services are meant to be self-sustaining — funds received are used to maintain operation.

“Our parking fees are market-based – we don’t set prices arbitrarily,” he said. “We’re trying to do it for the benefit and the economic volatility of downtown.”

Reis Phillips, store associate at Underground Printing and a senior at UNC, said she was frustrated with paid parking in Chapel Hill because it creates a financial barrier for low-income people.

“I think sometimes people don’t come because they can’t afford the five or six dollars,” she said.

In her own life, she usually has to choose between paying to park or using the bus system to get to work.

“Most students have to take minimum-wage or self-employed jobs,” Phillips said. “If you have to pay to park, it’s always deducted from that. Already, you’re not making a ton of money.

Taking the bus will sometimes cause Phillips to show up to work late, which she says is a bad image of her. She added that the cost of parking is likely causing some residents not to visit Franklin Street.

“We are the people who support this community and spend money here and live here – but we can’t afford to pay to park here,” she said.

To get the day’s news and headlines delivered to your inbox every morning, sign up for our email newsletters.