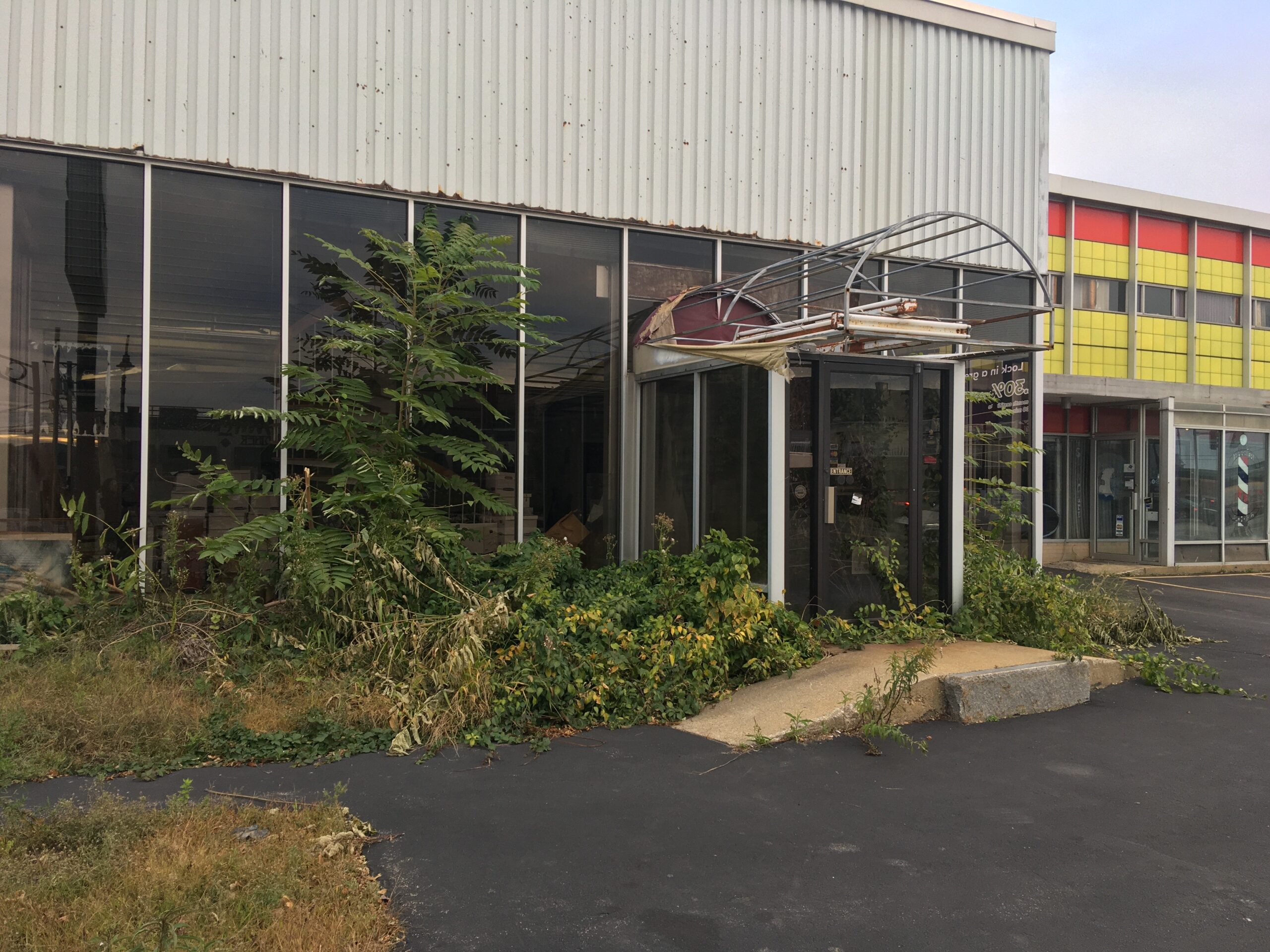 MANCHESTER, NH – The building at 533 Elm St. is an integral part of Manchester city center, and not in a good way. The former location of Michael’s School of Hair Design and Esthetics and Coiffures offers premium event parking next to the SNHU arena.

It is more or less that.

The building is abandoned and needs a facelift. The lobby has been transformed into a greenhouse by the invasive vines that now grow inside the building. It’s bittersweet, literally; this is what the vines are called.

Michael Kapos owns the building and the hairdressing school. In 2004, he moved his school to Bedford Mall. He rents the additional building on the same land to Meineke Car Care Center. The Elm Street location remained a shell of itself for nearly two decades.

Kapos has been contacted several times to comment on this story.

Looking inside through the window, you can see filing boxes strewn around a once-modern spiral staircase. Faded posters of glamorous women are displayed in shop windows. A cartoonish graffiti devil outside the building seems to keep them company.

Manchester Square is currently under new development at the southern end of the city centre. Michael’s empty hair school remains unchanged amid aggressive redevelopment in all directions.

City of Manchester Economic Development Officer Jodie Nazaka recalls having her hair done at Elm Street School for her eighth year dance in the late 90s. For prom she went elsewhere to get their hair done because the school moved to Bedford.

Nazaka said Kapos met with her and the Manchester Development Corporation in March. She said they had a great conversation. Kapos shared several potential plans for small, medium and large housing with retail on the first floor. The proposed plans were drawn up by a construction company he hired. Nothing happened after that, she said. 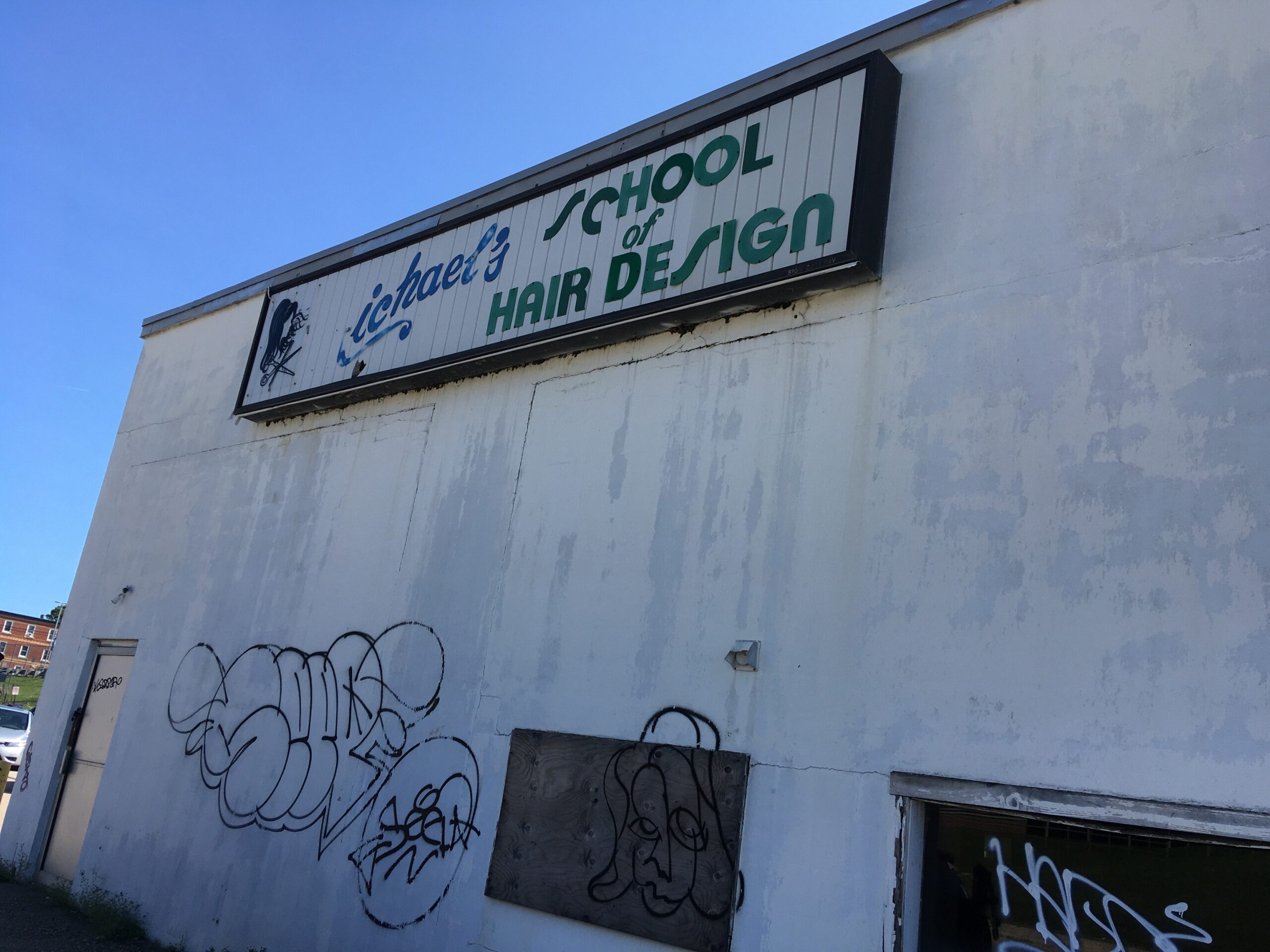 “This area is a prime destination and opportunity,” says 36-year-old Nazaka. She mentions new apartments on Elm Street across from the Market Basket and planned units for Auburn and Depot Streets, where the Manchester Mills and Varick Building have recently been. demolished. Nazaka worries about the proximity of the hairdressing school to the SNHU arena. She says ‘the first thing people see when they come to Manchester is a crumbling building’.

Nazaka says other developers have contacted her about the property. The problem, she says, is that it’s too small for big developers and too big for small developers. Nazaka also says that the building is outdated and needs a new sprinkler system, which would make the renovation very expensive.

Ceramic artist Christina Pitsch says she would like to see a trendy restaurant open in the old school.

“I like quirky old spaces. It’s a cool building from another decade,” says Pitsch, 50.

Pitsch lives and works on Granite Street, one block east of the hairdressing school, in a warehouse she bought and remodeled in 2013. Last year, she and her partner bought the building neighbor and plan to renovate the interior and restore the exterior facade.

“It’s a labor of love,” says Pitsch. She understands that restoration isn’t an option for every homeowner, but for Pitsch, part of what makes a city a city is rehabilitating old things instead of tearing them down.

The remains of Manchester Mills and the Varick Building can be seen from the loading dock at the rear of its warehouse. Pitsch says she hated to see those buildings demolished to make way for new apartments, but changes are needed.

“The Gaslight District has been no man’s land for so long. This neighborhood needs a big gesture to say that something is happening here.

“There’s a lot of incentive not to improve the property because taxation is based on the improvements rather than the land itself,” says Vayo, 40, from Manchester. 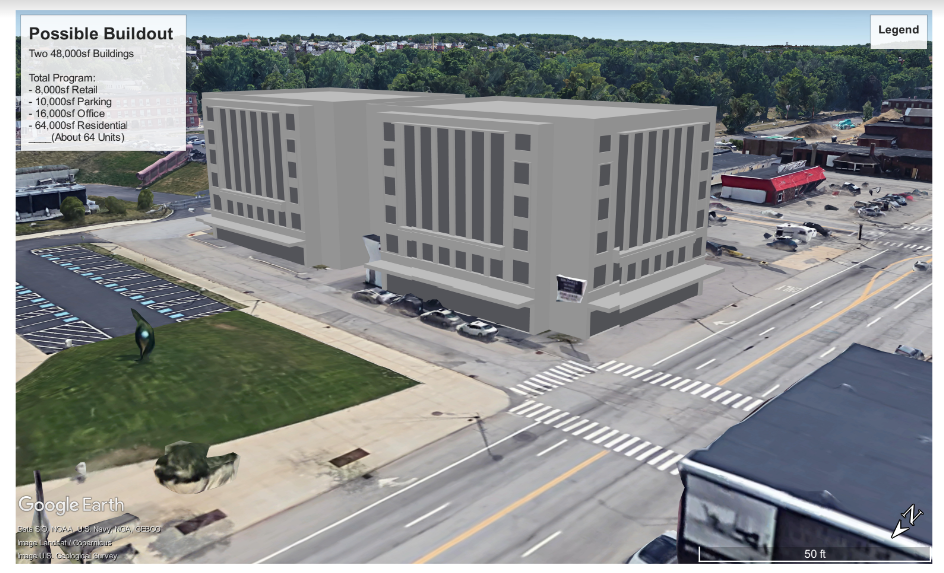 Vayo worked for the Southern New Hampshire Planning Commission. He is now senior vice president of planning and development for a real estate company on Long Island. Vayo created a mock-up of what the lot might look like with a five-story, 120-unit building with retail on the first floor in a 30,000 square foot plan.

“He hit the jackpot by securing a long-term lease with a national chain,” says Vayo, adding that revenue from leasing to a national chain means Kapos would have no incentive to sell the land or develop it.

Amira Hasoon, 30, is the artist-in-residence at The Factory on South Willow Street. She explains that she likes that the building is not boarded up and that she can see nature taking over it. After making a purchase at Antiques on Elm, two blocks south of the Old Trades School, she said

“It’s a beautiful concrete jungle. I quite like it.”