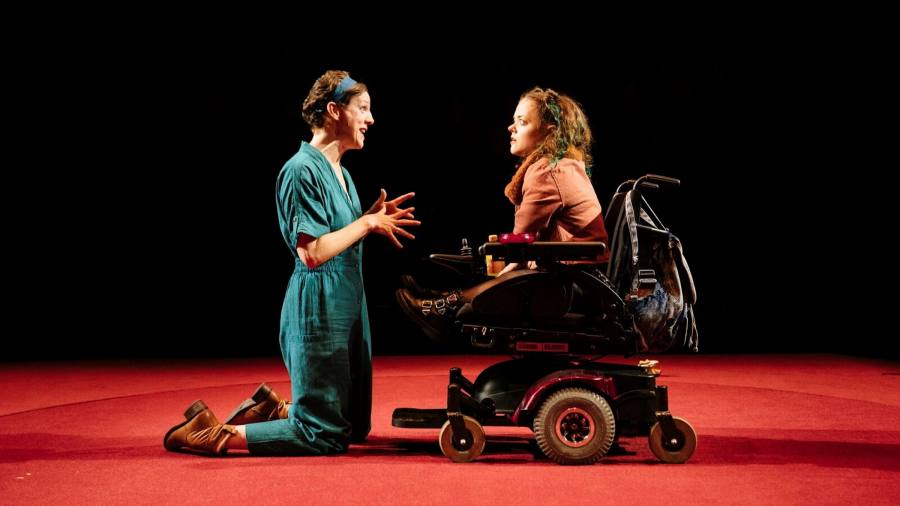 All of Us, National Theater review — furious drama of disability, politics and society

“Do you want to be normal?” The direct question is put to Jess, the therapist at the heart of Francesca Martinez All of us. He provokes a strong inspiration around the auditorium. What question should you ask anyone, and what assumptions does it contain – who should define “normal”? Also, it’s a man with a mass of issues who showed up at Jess’ door asking the question because she has a visible disability.

All of us is a play about the state of the nation: a candid, often funny, often shocking drama about what it is like to be disabled or have a chronic illness in contemporary Britain. This is the National Theatre’s latest cumulative examination of who we are, departing from Andrea Levy’s Small island at Alecky Blythe Our generationwhich brought the voices of teenagers to the stage.

It’s also the latest drama to demonstrate that having actors with different abilities on stage can be not only inclusive, but also expansive and enriching, often revealing new dimensions to a play. When Nadia Nadarajah, a deaf actress, played Celia in As you like it at Shakespeare’s Globe, he intensified the intimacy between Celia and Rosalind; Arthur Hughes, with radial dysplasia, discovers new depths in Richard III at the RSC; Partially paralyzed Daniel Monks brings new intensity to Konstantin’s desire for change in Jamie Lloyd’s staging of Chekhov The Seagull. Amy Trigg, in a wheelchair due to spina bifida, lit up the stage with her brilliant Reasons why you shouldn’t like me.

At the National, Martinez’s Jess, played with great warmth and wit by the author in Ian Rickson’s direction, has cerebral palsy (although Martinez prefers to describe herself as “wobbly”). That means Jess has a doctorate in psychology and a big job as a therapist, but she needs help opening a cereal package or popping her pimples. When an inexperienced official reevaluates Jess’ personal independence payment, she ends up losing her Motability car, her job, and her patients. His girlfriend Poppy, played by the excellent and hot Francesca Mills, is a sweary, sexy, funny 21-year-old girl who wants, like so many people her age, to live a little. But the cuts mean she loses her overnight carer and is therefore put to bed, in diapers, at 9pm.

The humiliation of this, the reduction of dynamic people to statistics and problems, the “otherness” and “us and them” thinking burst onto the scene. Jess de Martinez refuses to get angry; his piece, on the other hand, is very angry. It’s at its best when it sticks closely to its characters, showing us, rather than telling us, the details of the grim impact of government policies, cuts and shortages.

Where it strays is in trying to encompass a whole range of issues: there are sections of dialogue that become more political rant than political game, undermining its impact. Some of the characters seem very sketchy: Aidan, Jess’s reluctant client who was damaged by a toxic childhood, and her father, a rigid Tory MP, need a lot more work. It’s a shame, because what the play has to say is serious and important and concerns us all.

Judith Durham, Australian pop star who sang with the Seekers, dies at 79