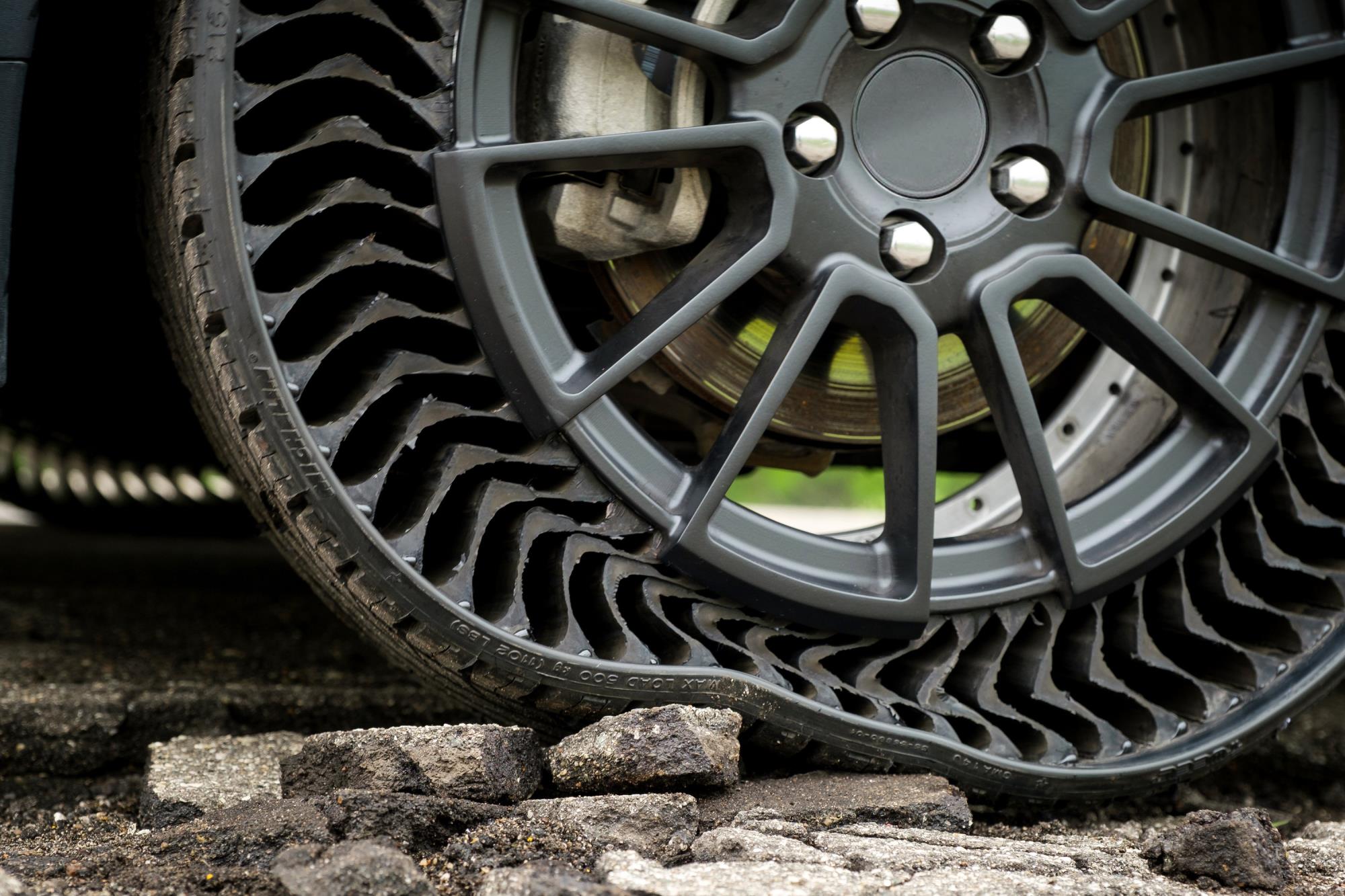 A Next-Gen Chevy Could Have Airless Tires

(CNN) — Michelin has worked with General Motors to develop airless tires that will be sold on a next-generation Chevrolet Bolt electric car, which is expected to go on sale in the next few years, a Michelin executive said. This could mark the decline of more than 130 years of tire tradition, but also the end of one of the most annoying aspects of car ownership: keeping air in the tires.

“We want to bring the next generation of the Chevrolet Bolt with airless tires,” said Alexis Garcin, president of Michelin North America in an interview with CNN Business, “and that’s going to happen now in the next three to five years. .”

GM has not confirmed that it is working on a new car that will be called the Chevrolet Bolt, the same name as the automaker’s current electric vehicle, but GM said it is working on a wide variety of electric vehicles, including affordable vehicles similar to the Bolt in price. Michelin and GM have tested the airless tire on current-generation Bolt cars, which the companies have been open to.

It’s ironic that the first airless tire for passenger cars came from the French tire manufacturer whose famous mascot – Bibendum, better known as the Michelin Man – is made from air-inflated tires. The company made a name for itself in the late 1800s with advances in pneumatic (air-filled) tires for bicycles and was among the first to produce and market them for automobiles. In 1899, the first car to set a world speed record with tires, a rocket-shaped electric car that traveled at 106 km/h, did so on Michelins. The company continued to produce pneumatic tires used in other speed record attempts by companies like Bugatti.

The disadvantages of filling tires with pressurized air are obvious. Air is a gas that can leak and tires are vulnerable to punctures. Tire manufacturers have spent more than a century finding ways to minimize punctures and keep air inside those circular rubber tubes, but it still happens with some regularity.

Michelin’s airless tire design relies on flexible ribs to provide a sort of spring action, much the same way air does in a pneumatic tire. If the tread is punctured, it makes little difference since the tire is not holding air. In fact, the sidewalls of the airless tire are completely open.

Of course, there are reasons why airless tires haven’t been used on passenger cars for over a century. Air has its advantages. For one thing, pressurized air allows tires to be customized for specific uses. For example, a driver operating an off-road four-wheel-drive truck may reduce the air pressure in the tires, which allows the tire to flatten out a bit, creating a larger footprint area on loose sand or dirtiness. The tires can then be re-inflated when the truck starts rolling again on the asphalt.

Additionally, automakers have been designing cars and their suspension systems for a century with the idea that vehicles would run on air-filled tires. Airless tires could work differently, which would present a challenge for automotive engineers.

Michelin tries to reproduce the behavior of air tires as closely as possible. Given the completely different structure of these tires compared to pneumatic tires, it will be difficult to replicate that feeling, said Ryan Pszczolkowski, who oversees tire testing at Consumer Reports. This is particularly difficult given that there is a wide variety of tires and they have different sensations and behaviors from each other.

“I mean, we’re literally reinventing the wheel here,” he said.

Michelin already sells an airless tire, called the X Tweel, for use on lawn mowers and similar off-road equipment like ATVs. One X Tweel for a lawn mower — it includes the tire and its integrated wheel, rather than the tire and wheel being separate — can cost upwards of $600, according to the product’s website. But Michelin says they last longer than pneumatic tires and provide a more comfortable ride because they’re not as bouncy.

But passenger car drivers are going to be pickier than lawn mower drivers about things like ride, handling and noise. The cars run at much higher speeds and corner much faster than off-road machines. Michelin engineers must reproduce the feel and performance of tires in this more demanding daily use.

For these reasons, the touring car version that Michelin is developing, called Uptis, has a different build even though it almost looks like the X Tweel. The central ribs that hold it are made of rubber reinforced with fiberglass injected with resin while the ribs of the X Tweel are made of polyurethane, for example.

Garcin also envisions the tire incorporating other technological advancements. It will be fully recyclable and renewable – it will be easy to retread and reuse – and it will have real-time connectivity so drivers can easily monitor tread wear.

Of course, any consumer acceptance of an airless tire will also depend on cost. But its introduction on a next-generation Bolt, a car that starts at just under $32,000, seems to indicate airless tires won’t be limited to the upper end of the market.

Beyond this first electric car, the wide variety of tire sizes and types already on the market will create its own challenges, Pszczolkowski said, as Michelin works to create airless tires for more vehicles.

“It seems like every time a new vehicle comes out, a new tire size is invented,” he said. “It’s really maddening.”

Ultimately, Pszczolkowski said, the success of airless tires really depends on how much hassle and expense consumers are willing to go to to avoid a flat.

How does an installment loan process work at Heart Paydays?